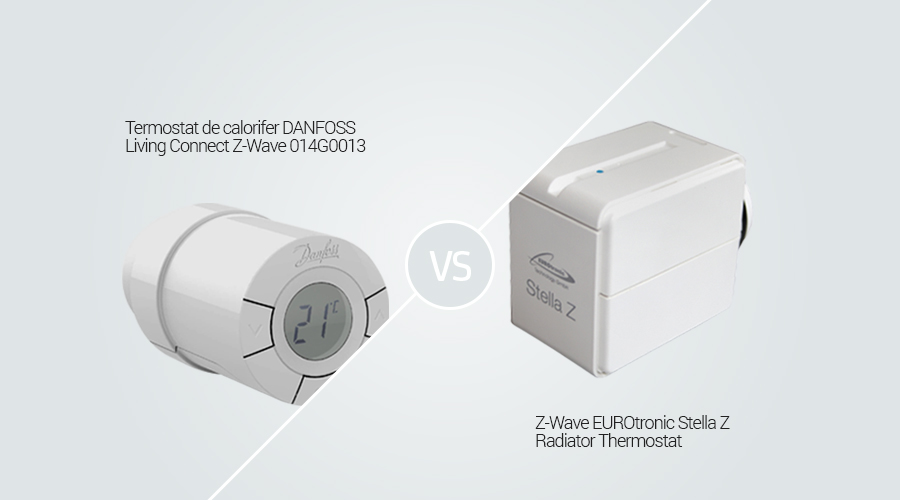 After a 2016/2017 winter with many nights and days below 15 degrees Celsius, we can draw some conclusions about the use of thermostatic heads to control heating on radiators, connected to a classic apartment boiler.

Both Danfoss Living Connect and Stella Z are robust products in terms of manufacturing, with an obvious design gain for Danfoss. This, through the LCD screen on which you can view the temperature and the status signaling icons, as well as the manual temperature adjustment buttons, brings an extra ease to use.

Unfortunately, in the apartment where it was tested, the screen and buttons were too attractive for a 2 years old child, who had a passion in “temperature regulation” on the radiators he had access to. Stella Z proved to be much more “useful” in terms of design in this situation, which did not offer any special attraction due to its shape for the child, so that the temperature could remain as set by the VIKI brain.

The two thermostatic radiator heads are powered by two AA batteries which, for Danfoss, ensure an autonomy of 3 months, and for Stella Z, of 4-5 months. The configuration of the two thermostatic heads is relatively simple, the steps can be easily reproduced according to the technical manual provided by the manufacturer. For consistency, the Danfoss manual is better structured, more concisely explaining the steps to follow to initialize and fix the device.

So far, it could be concluded that Danfoss is clearly superior to the “rival” Stella Z, but during our tests we discovered a problem in the operation of Danfoss. And this has been reproduced on several Danfoss thermostats, therefore we conclude that it is not a problem of use, but rather of adaptation to customer needs.

The essence of the problem is that Danfoss reacts slower to the temperature setting commands given by the controller. Although the command is successfully sent to the Z-Wave network infrastructure, the internal algorithm of the Danfoss equipment decides in many cases not to open / close the valve, probably in order to ensure a certain thermal inertia of the radiator. It is often frustrating to see that, although heat is needed, even after 10 minutes of setting the temperature to rise, Danfoss does not react mechanically and keeps the valve closed.

Our rescue was the less “pretty” Stella Z from Eurotronic, which has an extremely useful function, called Direct Valve Control. In essence, this way of working the thermostat allows its direct control by the house server, by actuating the ON / OFF of the valve or by sending an opening percentage, just like a dimmer for lights.

This way, the radiators (closing and opening them) were controlled directly by the smart VIKI application, without depending on how the internal thermostats of the valve interpret the temperature read by the internal sensor.

Another cause of Danfoss’s failure during the 45-50 day test was its intelligent ability to stop the flow of water through the radiator, when there is a cold stream of air around it (when the window is opened). Due to the extremely cold weather and the medium quality double glazed windows, the temperature around the window was at least 2-3 degrees lower than in the rest of the rooms. It is possible that this current of cold air has descended over the thermostatic head from the sill area to the floor and influenced the operation of the thermostat, keeping it with the protection function activated (closed).

During the tests, the thermostatic head from POPP was also used, but there were no big differences between this and the problem observed at Danfoss. An improvement of the Popp Heating Thermostat is its ability to report the temperature read by the internal sensor (usually 1-1.5 degrees higher) than the real one, a variant that could partially solve the problem of forced opening of the water flow by sending the thermostat a SETPOINT 2 degrees higher than the internal sensor temperature.

In both situations, a Boiler Receiver HRT equipment from Secure (HRT4 ASR-ZW), temperature sensors from AEON and VIKI artificial intelligence software were used to control the boiler and the water pump.